Skip to content
The human rights situation in Bahrain continued to deteriorate in April 2018. 1977 serious human rights violations were observed between the 1st and 30th of April 2018, including arbitrary arrests, house raids, unfair trials, crackdown on peaceful protests, restrictions on freedom of movement, prohibition of Friday prayers, media materials that incite hate speech, enforced disappearance, torture, ill-treatment, injuries, destruction or confiscation of property and violation of freedom of religion and belief.
While the number of violations in April exceeded those of March and February, the total violations were distributed as follows: 58 cases of arbitrary arrests, including 9 children; 42 cases of forced disappearances; sentences amounting to 847 years and 9 months in prison, BD 18,200 equivalent to approximately US $48,404 of total fines and bails; 56 cases of torture and ill-treatment, including 17 cases of deprivation of treatment; 589 media materials that incite hate speech; 80 unlawful raids on houses and residential facilities; 72 crackdowns on peaceful gatherings and protests; 878 individuals who were arrested or accused were referred to court because of trials that violate freedom of expression and peaceful assembly; violation of freedom of movement by the continuation of the siege on Duraz area for 678 days and the imposition of house arrest on the highest religious authority for the Shiite Muslims in Bahrain, Ayatollah Sheikh Isa Qassim, for 341 days without a judicial order or administrative decision; violation of freedom of religion and belief by prohibiting Friday prayer in Duraz 4 times in April bringing the number of prohibitions to 94 times since 2016; 2 case of unlawful confiscation of property; and 3 cases of destruction of property.
In April, Bahrain witnessed 262 protests, while since the beginning of the year the number of protests has reached 1440 even though there has been a complete ban on peaceful assembly for 1307 days. The number of arbitrary arrests since the beginning of the year has reached 376, including 55 children. Since 2012, the nationalities of 606 citizens have been revoked for political reasons. Moreover, since the beginning of the year, there have been 438 illegal raids on homes and residential facilities; 445 Bahraini citizens, including 5 women and 5 children, have been arbitrarily convicted; total sentences amounting to 2888 years and 11 months in prison, in addition to a suspended 3-year jail term; total fines imposed on the arbitrarily convicted amounting to US$ 1,019,276; 135 sentences of revocation of nationalities at several levels of litigation; 10 sentences of arbitrary deportation; and 14 death sentences. The total number of human rights violations that occurred in January, February, March and April are 5516. 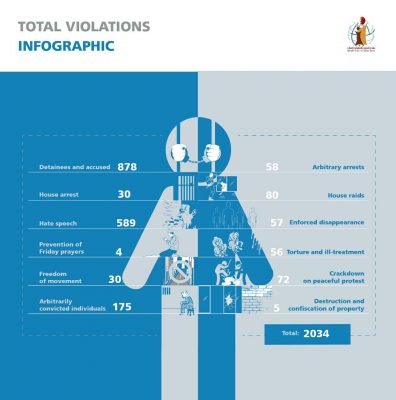 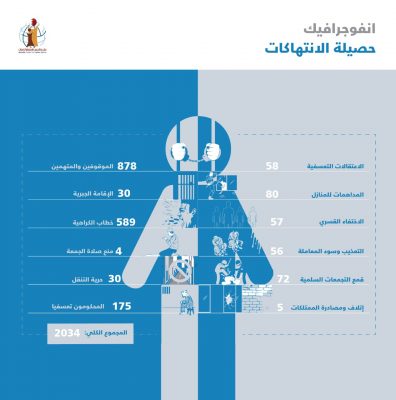 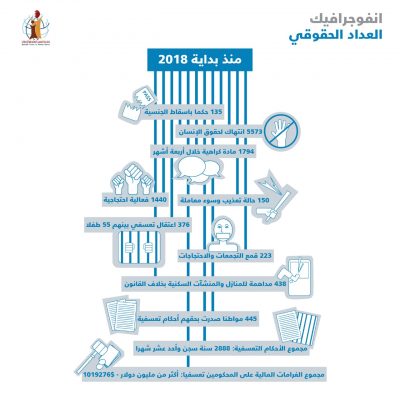 Three Bahraini human rights organizations commend the statement issued by the Office of the United ...

We are disturbed by the use of unnecessary and disproportionate force by police special forces ...

A major COVID-19 outbreak at Jaw prison in recent weeks is a stark illustration of ...