Responding to the decision of US President Joe Biden’s administration to temporarily suspend arms sales to Saudi Arabia and the United Arab Emirates (UAE), a coalition of civil society groups is calling on the Australian Government to follow his lead.

The Australian Arms Control Coalition (AACC) is urging the Australian Government to end the export of military goods to Saudi Arabia and the UAE, as long as there is an overriding risk that such weapons will be used to commit or facilitate violations of International Humanitarian Law, International Human Rights Law or other serious crimes against civilians, including children.

The Biden administration has also committed to reviewing the sale of as many as 50 F-35 stealth fighters to the UAE, finalised on the last day of the Trump Administration.

All F-35s have Australian made components, and so it is critical for the Australian Government to also commit to reviewing its own exports, to ensure they will not be used to commit or facilitate violations of international humanitarian and human rights law in Yemen.

As has been well documented, there have been alarming levels of civilian casualties in the Yemen conflict over the past six years, a war in which the United Nations said there are “no clean hands”. It is especially incumbent upon the government of Australia to ensure they are not further fueling this violence through defence exports to countries that have committed abuses as part of this conflict.”

All states, including Australia, risk complicity in war crimes if they continue to supply the Saudi-led coalition with arms. The Biden administration is acknowledging the disastrous effects of these continued sales. Other states should not continue to ignore the mounting evidence of alleged violations of international humanitarian law, war crimes and other abuses, collected by Yemenis, the United Nations, and human rights organisations over the past six years.

“Almost six years after the conflict began, Amnesty International has documented more than 40 coalition air strikes that appear to have violated international humanitarian law, many of which amount to war crimes. At the very least Australians deserve to know that this is how their government is spending our money. But really, it’s time for the Australian government to stop supplying arms to any parties involved in the conflict in Yemen.”

“Instead of exporting arms and military equipment to Saudi Arabia and the UAE for use in Yemen, Australia, the US and other nations should be pressing these governments to end their unlawful attacks in Yemen and hold those responsible to account.”

“The US is taking a step in the right direction. Our Prime Minister must step up and immediately ban the export of weapons to Saudi Arabia and the UAE.

Australia should not allow any weapons to be sent to countries in violation of international humanitarian law, especially those who have committed grave violations against children.”

Fatima Yazbek, the Head of Studies and Reports at GIDHR, said:

“The continuous arms sales to Saudi Arabia and UAE gave both governments legitimacy, by supporting a coalition that has committed war crimes and indirectly allowed them to continue their blockade on all Yemeni ports, which has resulted in a large humanitarian crisis.”

The AACC was formed in April 2019 out of shared concern around the lack of accountability and transparency in Australia’s defence exports, particularly around current arms sales to Saudi Arabia and the UAE to the devastating war in Yemen.

Its members include Amnesty International Australia, Save the Children Australia, the Australian Centre for International Justice, the Gulf Institute for the Defence of Human Rights, the Medical Association for the Prevention of War (Australia),  the Independent and Peaceful Australia Network, Human Rights Watch, and Wage Peace. 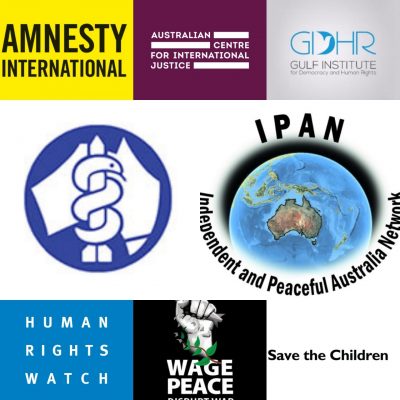 A prominent pro-reform law professor in Saudi Arabia is facing the death penalty for alleged crimes including ...

Responding to the news that Mona Kareem, an academic from Kuwait’s stateless Bidun community who ...

Responding to Cristiano Ronaldo’s public comments on his decision to sign for Saudi Arabian football ...